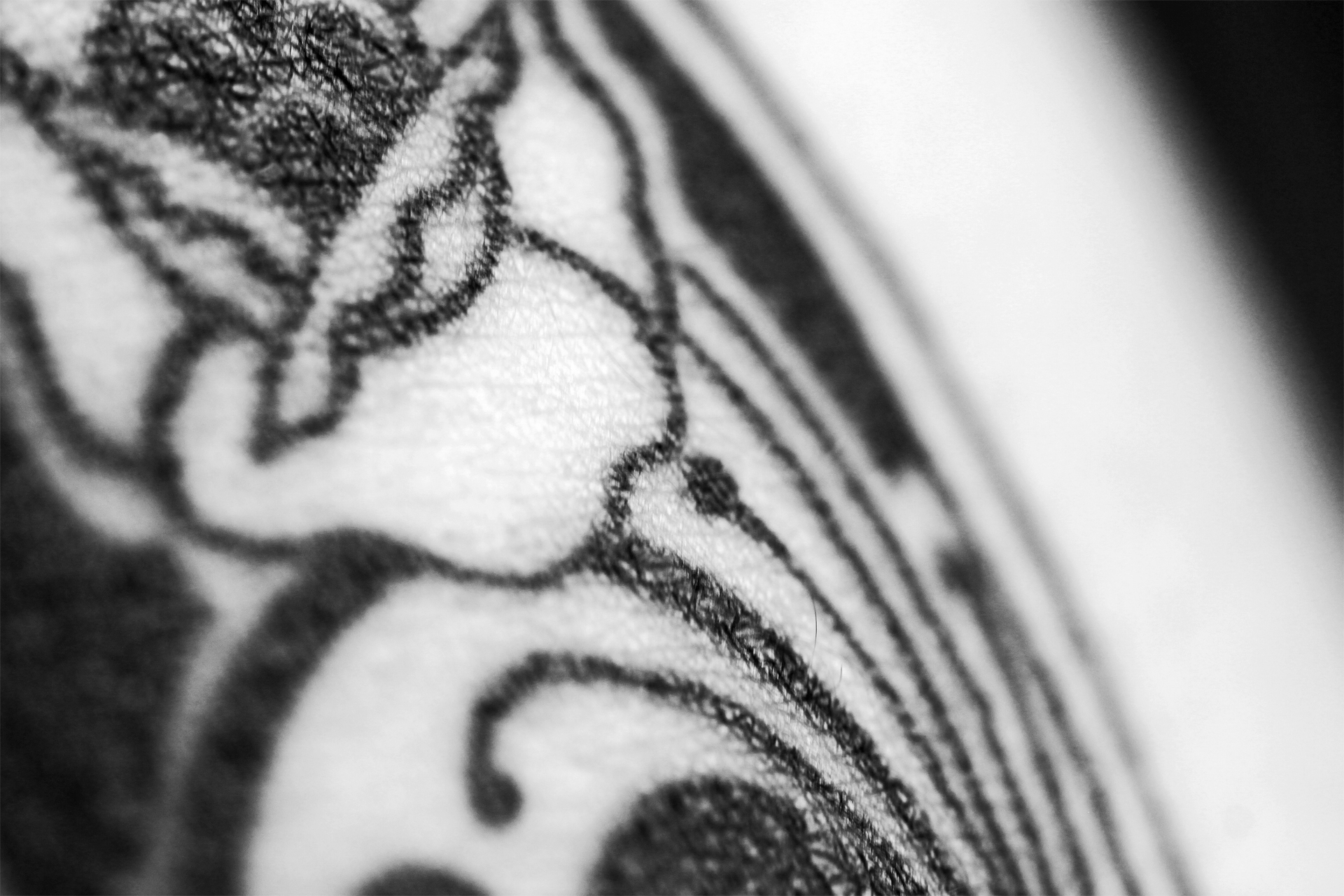 Rosario’s tattoo was done by Jon Gorman of Providence Tattoo. Rosario is a gondolier with La Gondola Providence. Perhaps, at a Water Fire he may have ferried you along the Providence River. Rosario told me the story of his tattoo, an incredible story, which I relate below as best I can.

The gondoliers of Venice can be the nicest people you’ll meet, but there’s a level at which they don’t really want to talk to you. I found this out when I asked a gondolier about training to become one. He waved his hand around like he was suddenly swatting flies. He just “didn’t know about that.” Of course, he did, but I figured he was taking me for yet another tourist. I mean, maybe I was to some extent, but I came to Venice specifically to train with a Venetian gondolier. So, I wasn’t going to give up just then.

“If you’re a gondolier, why are you asking?” he said.

I explained that I was a gondolier in Providence, Rhode Island, and I work on the Providence River, but ever since I was being taught how to do it, I felt… changed.

“Changed?” the gondolier asked me. “How?”

“It’s hard to explain,” I said, “it’s like I feel that there’s a way of gliding on the water and I’m supposed to be controlling it, and there’s a small light I can see. It’s somewhere on the gondola. But I can never see exactly where it is.”

All of this is the truth, by the way. I didn’t feel like it was a good moment to hold anything back. So, I didn’t. And then the gondolier smiled a bit. It was like a crescent moon shining in his face above his graying beard. “That is something of a change,” he said. He invited me to dinner with his family later that evening. This was a giant Italian dinner, it turned out, and basically I met his wife, kids, some grandparents, aunts, uncles, and some insane number of cousins. I can’t even, about the food. After dinner, the gondolier takes me out to the canal. For my first lesson. It was more like a negative number lesson, though. One where you have to unlearn some dumb stuff you were doing.

Evidently, I wasn’t a total disaster as an apprentice. I only had a month, so, the gondolier –I’m not supposed to name him—said we’d get where we could. “That won’t be much,” he told me. According to him I was a “lazy American with all the iPhone and no reality.” I think he really liked me. I think. Anyway, I did a lot of work on skills, a lot, and he let me take a few customers the last week. “The girls like you,” he warned, “just make sure you don’t get liking them. Eyes on the water.”

So, this all the backstory to how I got the tattoo. On the last night I was in Italy, the gondolier and I went out on two separate gondolas, with me following wherever he led. I had no idea where we were going. Then, right in front of me there was open water and the Isola di San Michele out in the distance –this is the Isle of the Dead. The gondolier pulled up close to my boat, reaching over and passing me a very large, lit candle. The wind threatened to put out the flame, and the gondolier shouted, “Do not let the flame go out!” I managed to get the flame under control, and he told me to go to San Michele. To memorize the name on the first grave I see, and to return with the candle still lit. He glided away at a speed that made asking any questions totally pointless.

I could say a lot about that ride to San Michele. All of it would be me describing how I moved that damn candle around the gondola. Could the moon’s reflection have been cascading through the lagoon waves in luminous patterns that calm the very soul? I have no idea. Nothing. I had burn marks on my hands for weeks after. Maybe I learned a lot about how the wind feels from all over a gondola. I saw a grave, it was just there, and I memorized the name “Rosario” by saying it over and over in my head while protecting the candle. “Rosario” became my gondolier name. The gondolier was there to greet me when I returned. I passed the lit candle to him the moment I pulled in close enough and he nodded at me. We silently glided into the dark canals.

Back at his home, the gondolier drew a design on a piece of paper. “You have to keep it with you, keep it safe. Safe. It is like a passport.”

I looked at the design and thought it was phenomenally cool. And then I realized that we were talking about me—me, you know—keeping a piece of paper perfectly safe, for the rest of my life.

“Being a lazy American with all the iPhone, could I take a picture of this?” I asked the gondolier.

I went back to the States, and back to my regular life with this irregular experience and a design on a piece of paper that I knew I should never lose. It got to me little by little. I’d worry stuff like, “What if someone steals my wallet?” “What if I friggin’ put it in a safe place and don’t remember where the friggin’ safe place is?” “What if it falls in the water and disintegrates?” This “passport” was way too valuable. But you can’t live like this. Then it hit me. You can’t lose a tattoo. And if there is any way of copying the design on the paper that qualifies as real, it’s a tattoo. This seemed so obvious, like a moment of clarity, or whatever. I went to Jon Gorman and got the tattoo. Still haven’t lost the piece of paper, though. Don’t know how that’s happened.