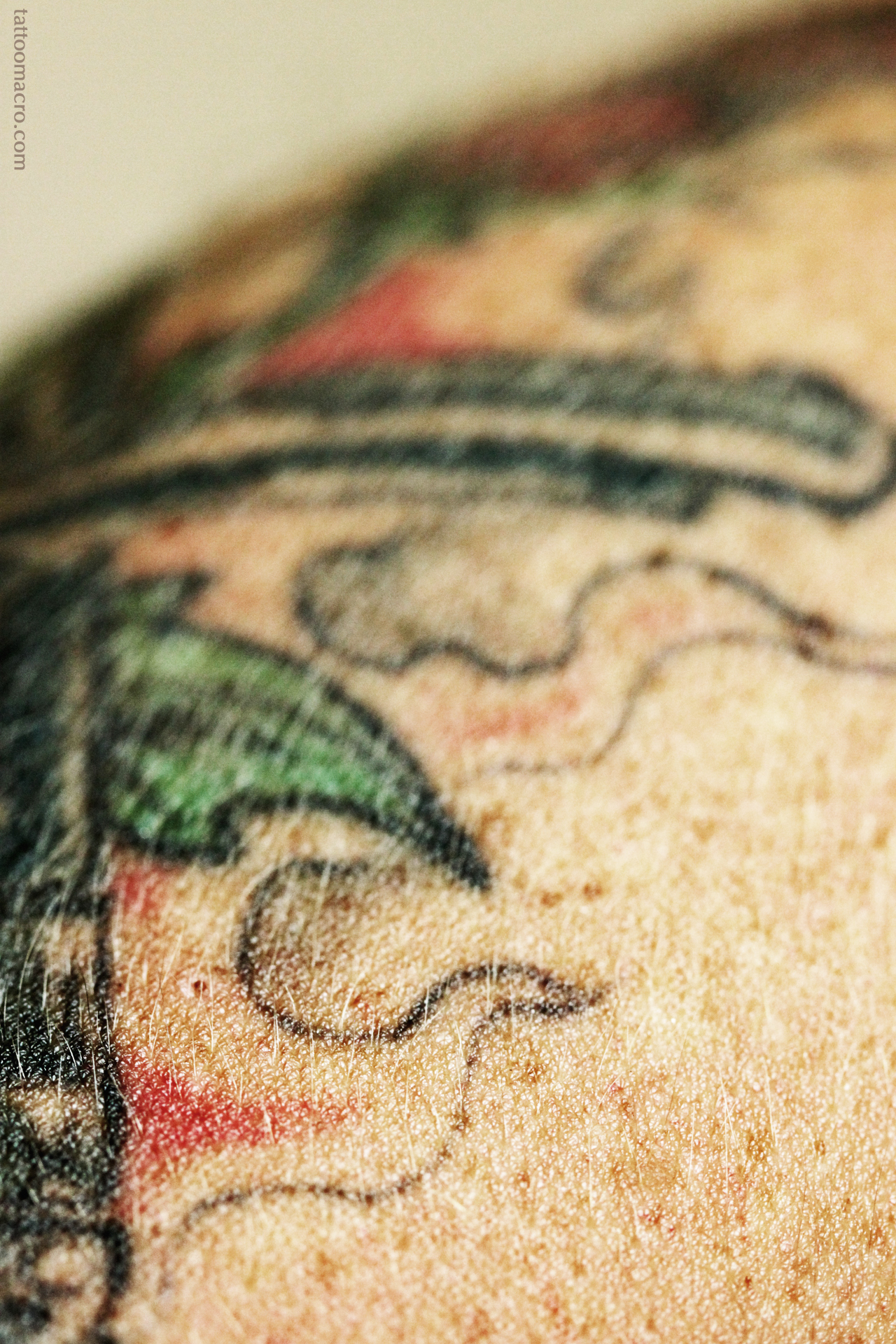 TB’s tattoo was done by Roger “Fatty” C. Jordan, who passed in 2012. He was the owner of the Art Room Gallery in Woonsocket and a legendary tattoo artist in Rhode Island. TB, a local construction dude, part-time musician, and full-time person who “puts up with a lot of shit,” agreed to have his Fatty tattoo photographed in the hope of a restoration of a kind via Photoshop. Roger had promised him a retouch but that hadn’t happened. I was happy to do the shoot and work on the tattoo, and if it weren’t for his friend, Dave, who happened to be around, this would have been a very nice post that didn’t raise any questions or controversy.

But Dave says, “I bet there’s a dick in it.” And then TB says, “No way—this is a clean Fatty,” and the two of them start affably arguing whether or not there is a tiny dick somewhere in his tattoo. Now, other informants have explained to me that the issue of there being a dick hidden inside a tattoo is something of an inside joke among tattoo artists and can reflect rather negatively on the client. The friendly argument between TB and Dave led me to believe that either Fatty had been messing around with them in an inclusive manner (both were regular clients) or one or both of them were actually jerks. Admittedly, they are kind of jerky, yet clearly hold Fatty in great esteem and wear his tattoos proudly. Looks like the truth of the matter lies between them and Fatty, and the rest of us can only guess.

So, this was how I got roped into settling a bet between TB and Dave about whether his Fatty was dick-free…

Going into a shoot on what amounted to a Dick-Quest was quite a trip. There were, basically, dicks everywhere I looked. Here a dick, there a dick, everywhere a dick, dick. It was kind of a rush, but then I
realized this is way too easy. Were the dicks I was seeing really dicks? Or was I projecting dicks onto anything remotely dick-like under my lens?

There’s the saying that when you have a hammer everything looks like a nail. It seems to me that when you are looking for dicks, they’re just as likely to be pretty much everywhere. A statistical survey of a large sample of Fatty’s tattoos might tell us something about the prevalence (or lack thereof) of dick-like shapes in the tattoos, but going on the one tattoo we have, disentangling an artist’s style from intentions isn’t possible. If you want to see a dick, it will be there for you. You will find it. And the dick will be YOU. This very well could have been Fatty’s message all along. Don’t be a dick to your tattoo artist. Or else.

(Note: TB decided to have me write up something for his gallery.)